I've decided to move my blog to blogger full-time so it can be seamless with my website. If you're looking for it, it can be found here:
http://krisitn-walker.blogspot.com/

See ya over there!

Next week, I'm releasing my middle grade e-book ANNABELLE JINX AND THE GHOSTS OF SERENDIPITY FALLS just in time for Halloween. But it's available for pre-order right now.
I'm so excited!
If any book bloggers are interested in a review copy, leave a comment.
http://www.amazon.com/dp/B00OK0489A
https://www.smashwords.com/books/view/485211

I didn't do such a great job of keeping on top of the blog. Ah, well. Life happens.

In the meantime, 7 Clues to Winning You has been re-released with a new cover and everything. Here it is on Amazon and here's the Kindle version.

This is the new cover. What do you think? 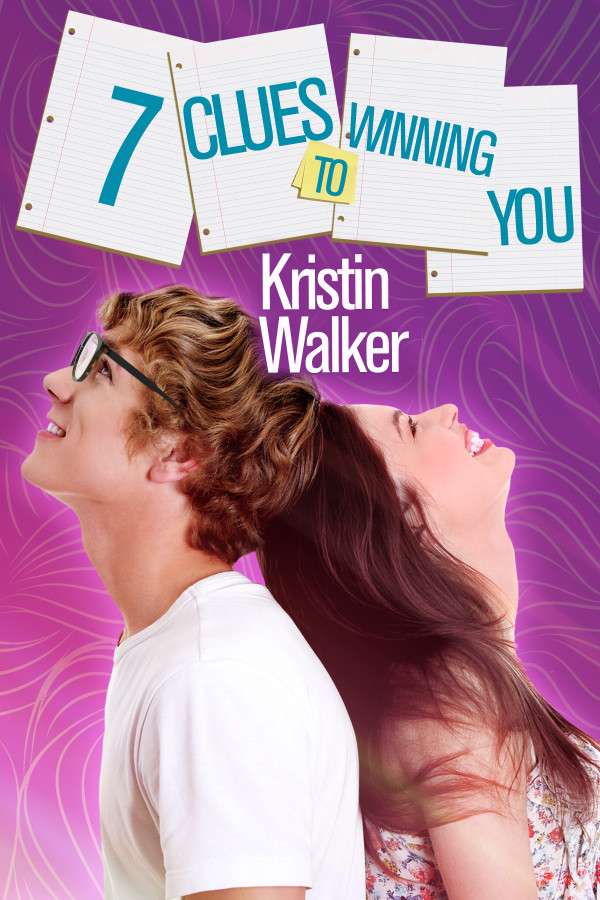 Other than the obvious... It's been a long while since I've attended to this blog. I guess that between LJ, Facebook, and Twitter I was getting overwhelmed with maintaining an online personality. I have enough trouble maintaining a real life personality. :) But my second book is out today, so I thought I'd take this chance to start again with my blog. I can't promise that it will be interesting or voluminous, but I'll do my best.

A Thing of Beauty

A thing of beauty is a joy for ever:
Its loveliness increases; it will never
Pass into nothingness; but still will keep
A bower quiet for us, and a sleep
Full of sweet dreams, and health, and quiet breathing.
Therefore, on every morrow, are we wreathing
A flowery band to bind us to the earth,
Spite of despondence, of the inhuman dearth
Of noble natures, of the gloomy days,
Of all the unhealthy and o'er-darkened ways
Made for our searching: yes, in spite of all,
Some shape of beauty moves away the pall
From our dark spirits. Such the sun, the moon,
Trees old, and young, sprouting a shady boon
For simple sheep; and such are daffodils
With the green world they live in; and clear rills
That for themselves a cooling covert make
'Gainst the hot season; the mid-forest brake,
Rich with a sprinkling of fair musk-rose blooms:
And such too is the grandeur of the dooms
We have imagined for the mighty dead;
All lovely tales that we have heard or read:
An endless fountain of immortal drink,
Pouring unto us from the heaven's brink.

Nor do we merely feel these essences
For one short hour; no, even as the trees
That whisper round a temple become soon
Dear as the temple's self, so does the moon,
The passion poesy, glories infinite,
Haunt us till they become a cheering light
Unto our souls, and bound to us so fast
That, whether there be shine or gloom o'ercast,
They always must be with us, or we die.

sbrezenoff ), author of THE ABSOLUTE VALUE OF |-1|, which hit the shelves this month. The absolute value of any number, positive or negative, is its distance from zero: |-1| = 1

Noah, Lily, and Simon have been a trio forever. But as they enter high school, their relationships shift and their world starts to fall apart. Privately, each is dealing with a family crisis—divorce, abuse, and a parent's illness. Yet as they try to escape the pain and reach out for the connections they once counted on, they slip—like soap in a shower. Noah’s got it bad for Lily, but he knows too well Lily sees only Simon. Simon is indifferent, suddenly inscrutable to his friends. All stand alone in their heartache and grief.

1. As writers, we all go through times when we doubt our abilities and lose confidence in our work. What did/do you do to get through those moments?

I have a special folder in my email with a collection of notes I've gotten over the last few years, from some people I respect quite a lot. It would be nice if I didn't need those crutches, but until I reach a higher plane of consciousness, it'll have to do.

2. What kind of kid were you when you were the same age as your main character?
Have you seen that Albert Brooks movie "Defending Your Life"? Maybe like a lot of people, including especially teens maybe, I was defined predominantly by my fears, and I had a lot of 'em. My consequent shyness meant that most of my peers--besides some of my very close friends--only had my T-shirts to judge me by. (Very little has changed, by the way. I still tend to dress in T-shirts that define who I am!) That meant to most of my school, I was a quiet kid who liked the Grateful Dead and Batman. If they knew what I was thinking all the time . . . well, who knows what they would have thought. Like I said, I was afraid to find out.
3. How did being that kind of kid influence the characters you created in ABSOLUTE VALUE OF |-1|?
|-1| has three distinct narrators, and therefore three main characters. Even though one of them--Lily--is a girl, I'd say me at fifteen had a bit in common with all three of them. It's probably not very insightful to say that if you took me at 15 and found the extreme version of a few aspects of my personality, you'd end up with Lily, Noah, and Simon. So I was a quiet kid, like Simon, and a reader and writer like Simon. But I was also strongest, grades-wise, in math, and as likely as not to pine over someone who didn't much care about me, like Lily. I also had her tendency to put my feet into square tiles and quickly try to figure the length of the sides based on the length of my foot. (Remember? a^2 + b^2 = c^2) I know; thrilling pursuits in math, right? As for Noah . . . maybe he's some kind of pure id. Let's not go there.
4. Fright and Delight: What was the most frightening moment of getting published? What was the most delightful?

My most frightening so far is definitely signing at BEA this summer. I had this dreadful idea that the only people in line would be my wife and a handful of former coworkers. It actually went pretty well. But, of course, part two of the scary is happening on September 23 here in the Twin Cities: my release party and reading at Magers & Quinn. Very scary. Also I might have to curse in front of my wife's grandparents. (Yes, |-1| has a plethora of vulgarities.)

The most delightful has been reading the reviews from bloggers who enjoyed and connected with the book, which is a great thing, because every so often another review appears in my Google reader feed, and I get another delight!


Thanks so much Steve!

Order THE ABSOLUTE VALUE OF |-1| here or here.

I'm doing a happy dance to have my brilliant friend and awesome author, Saundra Mitchell here to brighten up my blog with a guest post to celebrate the release of SHADOWED SUMMER in paperback, coming in just TWO DAYS!

One of the things I really enjoyed about A MATCH MADE IN HIGH SCHOOL was that not every guy presented in the novel was destined to be a romantic interest. And not in the sad, unfortunate, he sure loved her but she picked someone else way.

Fiona and Todd never had a romantic relationship, and they never even hinted at it. There was no maybe-possibly teasing going on. Kristin wrote them as an enmity turned friendship all along.

And as much as I enjoy a good romance (and there is one in MATCH, btw,) it's a pleasure to see a friendship written with as much intensity and consideration as the love matches.

I think a lot of times, pop culture insists on the idea that young men and women can't be just friends. And lately, I've seen a lot of pop culture that insists that boys are pretty dumb and incapable of rich, inner-lives- which is why girls need girlfriends first.

Not only do I think that's untrue, I think it's unfair. Most of the people we meet in our lives, who become part of our lives, are our friends- male and female.

And guys aren't the bumbling dorks who inhabit every single commercial for an appliance ever. Every person has their own inner-life, their own secrets and feelings and self.

So while my book doesn't bring the funny or the hijinx that A MATCH MADE IN HIGH SCHOOL does, I'm pleased that we do have that in common. Boys who can be friends, who get to be people instead of gloriously perfect romantic foils for our heroines.

I think YA fiction could use a few more boy-friends, don't you?

Thanks for dropping by, Saundra! Get your hands on it!

Well, here is the last remaining Deb on the blog tour (who also was bumped to 2010, like I was). It's Kimberly Derting, aka

kderting, author of THE BODY FINDER.

Kimberly lives in the Pacific Northwest, which is the ideal place to be writing anything dark or creepy...a gloomy day can set the perfect mood. She lives with her husband and their three beautiful (and often mouthy) children, who serve as an endless source of inspiration for her writing.

Violet Ambrose is grappling with two major issues: Jay Heaton and her morbid secret ability. While the sixteen-year-old is confused by her new feelings for her best friend since childhood, she is more disturbed by her "power" to sense dead bodies—or at least those that have been murdered. Since she was a little girl, she has felt the echoes that the dead leave behind in the world... and the imprints that attach to their killers.

Violet has never considered her strange talent to be a gift; it mostly just led her to find the dead birds her cat had tired of playing with. But now that a serial killer has begun terrorizing her small town, and the echoes of the local girls he's claimed haunt her daily, she realizes she might be the only person who can stop him.

Despite his fierce protectiveness over her, Jay reluctantly agrees to help Violet on her quest to find the murderer—and Violet is unnerved to find herself hoping that Jay's intentions are much more than friendly. But even as she's falling intensely in love, Violet is getting closer and closer to discovering a killer... and becoming his prey herself.

1. If you had a time machine and could go back to the early days of your writing career and give yourself one piece of advice, what would it be?

Don’t ever write to get published, write because you love it! The rest will take care of itself.

2. If you weren't a writer, what would you want to be (or what do you think you would be), career-wise?

As a kid, I really wanted to be “Lady Trucker,” but as I got older I realized “mullet” isn’t a good look on me. Plus, I really like showers. I’d probably be a rock star. Or an astronaut.

3. What did you do to celebrate your book deal? Pop some champagne? Extravagant purchase? Dinner out? Pizza delivery?

We were all together on a camping trip when I got the news. After "the call," my husband and kids surprised me with some (warm) champagne and a sign that the kids had made (just in case!). So we all toasted the good news with our plastic cups. My youngest was definitely not a fan of champagne!

Lady Trucker? Ha! Lemme guess...you watched a lot of BJ and the Bear when you were a kid, right? Greg Evigan was so sexy.

Thanks for stopping by and wrapping up an amazing year of the Debs Blog tour, Kimberly!

Thanks to everyone for sticking with me throughout the Debs Blog Tour. It's been a blast!

Don't be a fool on April Fool's Day. Win a copy of A MATCH MADE IN HIGH SCHOOL instead!

Only one week left!

I pity the fool who doesn't enter!